The Winnowing Circle  - A New Novel by Kevin Roberts.
Our Kitchen-Party releases will continue thru 2018 in St. John's.
pilot.hill@icloud.com
Praise For Kevin Roberts

Deeply moving and written with great integrity, tautness, and compassion – a broken circle but underpinning the remnants is love. A Lear-like acceptance of how the world is – “poor naked wretches where so e’er you be”.

Ross Clayton in praise of The Winnowing Circle

Roberts richly textured life is reflected in his writing. Whatever part of the world he  writes from he does so with a finger on the raw nerve that runs inside us and is linked inexorably to our mortality.  -- Heidi Greco  Prairie Fire

Kevin Roberts has an astonishing range of perception with a powerful rapport with nature and humanity... He suggests there is no certainty – only the ebb and flow of tides natural and human. His work is both grim and humorous but unsentimental.  Bert Almon  Canadian Literature

This is a story of great political and moral compass. Roberts has painted a vivid mural of the landscape, people and culture of an Aegean island as the ideological battleground on which his antipodean rationalist hero confronts the inescapable choice between action and passive complicity. A gripping and challenging exploration of issues which remain universally true.  Chris Kourakis

This review just in from Pacific Book Review.

The Winnowing Circle by Kevin Roberts is a delightful combination of Elizabethan themes with age-old plot lines that never run dry. The characters (and their own unique qualities) are taken from German and Celtic mythology and legend, ancient Greek literature, and mixed with some pretty cool minor characters that add that special spice to a story that makes the reader want more and more of the dishes the author is serving. ...readers will find this book exciting and suspenseful, as it plays to not only emotions, but also logic, reasoning, faith, and down home values like family, the sanctity of “home,” and hope for a better future for us and those that come after us. Any reader who likes a good story that also blends genres will like this book..... There is no specific one word or one phrase that will describe this book in all of its goodness.
Russell D. James.. Pacific Book Review

This just in from Amazon:

5.0 out of 5 stars
By
Sannox - See all my reviews
Amazon Verified Purchase(What's this?)
This review is from: The Winnowing Circle (Kindle Edition)
Kevin Roberts' latest novel pulls the reader along at a challenging pace through landscapes as varied as an English University, the west coast of Canada, and the hills of a remote Greek island. The main character, a naïve Australian-born post-graduate student, struggles with the brutal reality of life in Greece under the totalitarian rule of "the Generals " after their coup in the late 60's . How he gets to this rugged island and forms deep attachments with its shockingly raw, deep-rooted people (so unlike the English university life and the trivial social concerns he despises but endures) forms the basis of the novel. Along the way, there is the entangled story of the Greek woman who beguiles him, fascinates him, shocks him and ultimately moulds him into the man he could not believe he could ever become.
Concise, easy to read, hard to forget.
The Winnowing Circle

In Kevin's new Novel, a young Greek woman and her Australian boyfriend studying in England in 1972 return to her family’s village on a small island in the Aegean Sea to see her Communist father, who has just been released from prison in Piraeus.

Set in the uneasy and repressive  period of the Greek Colonels’ dictatorship, the novel records the  passionate violence of resistance to the ruling Fascists  on the Island and the couples’ unavoidable part in the local  conflict as death approaches the Island. 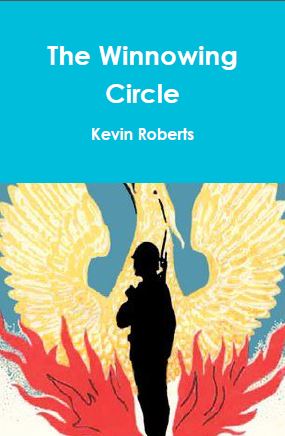